Informal settlements, defined as housing constructed on land in which its occupants have no legal claim, and unplanned settlements, where housing is not in compliance with regulations or else unauthorized, account for one-third of the urban form and house 30-70% of the developing world’s urban population, well over a billion people. According to the United Nations 2013 World Economic and Social Survey, three billion people will live in improvised and/or unauthorized constructed environments by 2050. Mutability and volatility are constants of informal settlements, making tracking their geographical growth and movements difficult, even in the era of Big Data and the unprecedented scope of satellite surveillance and remote sensing. Whether these areas are mapped, who controls the cartographic process, how geospatial data is collected and generated, and how this information is then stored and presented to the public has profound effects on the people within these settlements and can have consequences for those in legally recognized urban areas through larger geopolitical conflicts.

For those living in informal housing outside large cities like Dharavi in Mumbai, Kibera in Nairobi or in Brazilian favelas, a lack of geographic recognition shuts residents out of urban decision-making processes and resource distribution. Water scarcity and sanitation are persistent problems in socially excluded, unmapped areas. If maps do exist, actual structures can differ from official records because many cities have not expended resources to build spatial data frameworks for informal settlements, and they are erected without public oversight of land use and building regulations.

Municipal maps not only depict structures and roads, but also track geographic components of the people residing there, such as in the case of public health, education and delivering aid. Constant shifting of the built environment hinders record-keeping for streets, parcels and property records, meaning census and demographic data collection will be inaccurate – if the process is even attempted. In Fortaleza, Brazil, reportedly 70% of existing streets were not recognized by the local government in 2019, meaning any addresses on these roadways were not in municipal records and so not considered when constructing city services, such as public health facilities. Such circumstances meant Covid-19 cases in Fortaleza’s informal community could not be georeferenced or tracked, making infection monitoring and prevention nearly impossible. Many local governments are already struggling with administering their urban cores and therefore have less incentive to map informal settlements or properly count their inhabitants. These unofficial neighborhoods are typically lower-income or in slum conditions, meaning a shallow or non-existent tax and voting base makes it difficult to represent their needs during decision-making processes..

While some governments and official institutions are unable or unwilling to devote resources to mapping informal settlements, some communities like Poço da Draga in Brazil conduct their own censuses, maintain local property records, and open source mapping tools like OpenStreetMap to fill in the gaps of official maps. The international NGO, Humanitarian OpenStreetMap Team, supports dozens of projects around the world gathering spatial data for community development and humanitarian action. One initiative focused on more than a million refugees of civil wars in South Sudan and the Democratic Republic of Congo who arrived in Uganda; together with the Ugandan Bureau of Statistics and the NGO MapUganda, resources for refugees were mapped and location data was used to coordinate aid efforts.

Conflicts drive population movements and alter borders, creating unacknowledged encampments or contested spaces in the process. Who determines what settlements are informal or recognized and how and what kind of information appears on a map in what order of importance remains at the root of the most intractable disputes. The map of Palestine became increasingly fragmented over the 20th century while under Israeli occupation, with the landscape today being described as “swiss cheese,” as territory is continuously being annexed by Israel and illegal settlements continue to be built. While the UN and 135 member states recognize Palestine as an independent state, the U.S. notably does not. 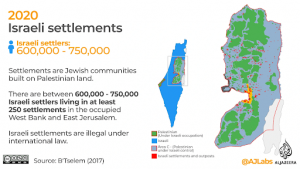 In a territorial conflict, maps cannot be value-neutral, and as Google, Amazon (AWS) and GIS services from Esri create and manage the data infrastructure relied upon by individuals and governments, choices made by these companies affect outcomes directly on the ground. Boundary demarcations and labels in online maps legitimize one set of viewpoints or territorial claims, and can serve as de-facto global recognition, e.g. illegal Israeli settlements. Neither Google Maps nor Apple Maps have a “Palestine” label on the appropriate land area, while Bing and MapQuest have the labels “Palestine” or “State of Palestine,” and Yandex Maps outlines Palestinian borders. While these private tech companies do not have the mission of arbitrating international boundaries, applications and geospatial technologies are so ubiquitous and critical for the global economy that they have an outsized influence, often above and beyond governments and traditional institutions.

With only 1980’s Soviet topographical maps to go on, a redrawn border between Azerbaijan and Armenia in 2020 was initially marked using data from Google Maps. This led to multiple controversies, with the new borderline running through a gold mine, cutting off part of a village, and forcing changes to flight patterns because of its proximity to a regional airport. New frontier towns and settlements have sprung up since the 2020 accord, and how and when they are recognized by Google could add fuel to a still simmering conflict. Though proprietary methods and data used to derive international borders are not publicly known or available,  Google does change maps according to the user’s IP address. These maps project authority and have enormous influence on the general population’s understanding, especially in tenuous political situations or areas affected by war. Experts have cautioned that satellite imagery is not reliable enough to determine boundaries and that it is a much longer process than the instant nature of Google Maps would indicate, requiring professional, non-commercial cartographic and geodetic work with diplomatic negotiations.

The growing field of geospatial tech and an influx of satellite imagery data represent opportunities to better map the developing world and support cartographic efforts in war-impacted countries. Projects like the Atlas of Informality attempt to map informal settlements and urban growth and development protocols that can be applied to geography around the world. Maps also require high quality data, and groups like Data & Society are working to build a post-colonial information structure while leveraging the power of AI to improve the fractured data environments found in many countries and regions of the Global South. Organizations like UNICEF and collaborations like the Locus Charter are also building an ethical framework for applying geospatial technologies and spatial data, especially important in development and humanitarian contexts.