In 2017, Saudi Arabia’s Crown Prince Mohammed bin Salman announced his country’s plan to build a futuristic megacity by 2025. Called Neom, a combination of the Greek word “new” and the Arabic term for “future”, this project is certainly no small undertaking. Neom is proposed to cover an area the size of Belgium along the far northwest side of Saudi Arabia’s Red Sea coastline. Its magnitude isn’t the only stand-out proposal; with a project price tag of $500 billion, this city from the future may also include an artificial moon, glow-in-the dark beaches, a floating autonomous port, flying drone-powered taxis, and robotic butlers for residential homes. The society built will foster zero cars and zero streets. Neom is not an out-of-reach idea though. In fact, the project is currently underway and has already gained momentum. 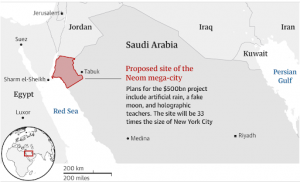 Geographically positioned at the crossroads of the world, Neom is only a four hour flight away for 40% of the world’s population. The website boasts green energy promises and a fully self-sustaining city, advertising sustainability and an orientation towards community and nature. At first glance, Neom sounds pretty enticing. Aside from some preliminary construction that has been spotted in Neom this year, the proposed location is still a vast untouched desert.

How realistic is it to build a fully operational and green megacity in a currently inhospitable place? What groups of stakeholders are being put at risk? And at what cost to humans and the environment will this project impose?

“The future has a new home” and “Better humans, better society” are two slogans proudly found on Neom’s affiliated website. The future’s new home happens to sit on part of the Huwaitat tribe’s land. The Huwaitat have spanned Saudi Arabia, Jordan and the Sinai peninsula for generations, even before the Saudi state was founded. With a land grab of 10,000 sq miles that was backed by the Saudi government, more than 20,000 Huwaitat’s have faced eviction since the project’s start.

In 2020, activist Abdil Rahim al-Huwaiti was killed by Saudi security forces while protesting his community’s removal from their homes. The death of this land defender gained international attention as the Business & Human Rights Resource Centre called on companies invested in the Neom project to respond to these violations. Big names such as McKinsey & Company, Oliver Wyman and Boston Consulting responded to the Centre but did not make any changes to their involvement in the project. In wake of such violations, some activists refer to Neom as a vanity project targeted towards the domestic elite and an international audience rather than a promising city for the actual inhabitants of Saudi Arabia. One source from the Guardian stated, “Neom is less a shining vision of the future than a grim symbol of Saudi human rights violations.”

Beyond indigenous human rights violations, one BBC article brings up an important caveat: how feasible is it for Neom to become “the world’s most food self-sufficient city” when it resides in a country that currently imports around 80% of its food? Critics have accused Neom innovators of “greenwashing,” or making grand promises about the city’s environmental friendliness to distract from the reality. Beyond food production promises of vertical farming and greenhouses, Neom also boasts of fresh water being provided by carbon free desalination plants. Thus far however, no recorded attempts at desalination plants run by renewable energy sources have been successful.

While this project aims at creating jobs and generating wealth independent of the country’s giant oil industry, critics mark the irony of a massive sustainable city initiative funded by the country’s rich oil-based economy.

Initial construction of Neom has included a golf course and a helipad. Officials hope to host the city’s first residents as early as 2024. This coming year will provide major headways to a project aiming to wean the country off of oil. With a growing international audience, it’s  pertinent that no human rights and environmental violations are committed in the name of fulfilling the grandiose promises of a green, futuristic megacity.

Visit Neom.com to learn more about the project from the organizers themselves.