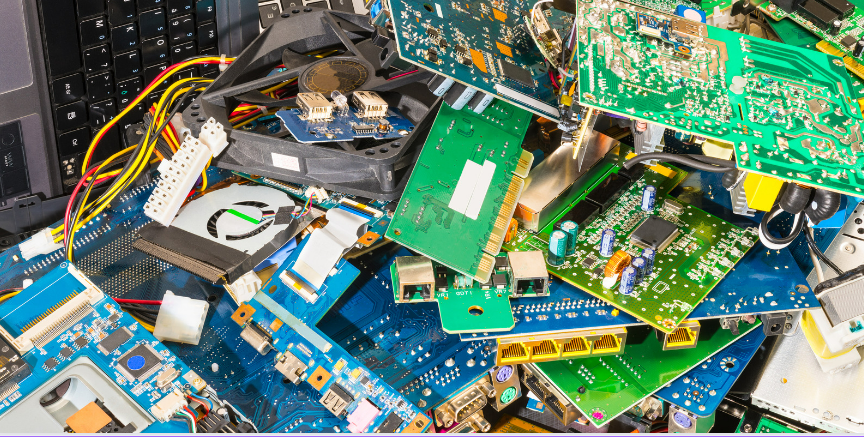 In 2020, a report by the UN’s Global E-waste Monitor found that in 2019, a total of 53.6 million metric tonnes (Mt) of electronic waste was generated globally. Furthermore, the generation of e-waste is projected to double (74.7 Mt) by 2030 with an annual growth of 2 Mt since 2014. Now the first question comes to mind is- WHAT IS E-WASTE?

E-waste or electronic waste is a term typically used to describe various forms of electric and electronic equipment that have reached the end of their useful life and are discarded. Some of the common examples of e-waste are end-of-life refrigerators, washing machines, microwaves, televisions, radios, computers, and cell phones. With the groundbreaking evolution of information and technology, e-waste is increasingly entering the waste stream. E-waste is often seen as a source of retrieving precious materials; however, the toxic substances (i.e., lead, mercury, cadmium and arsenic) contained within the waste endangers human health and the environment.

Among the above mentioned e-waste generation in 2019 (53.6 Mt), Asia is the largest producer of e-waste, accounting for the generation of 24.9 Mt, followed by North and South America  (13.1 Mt), Europe (12 Mt), Africa (2.9 Mt) and Oceania (0.7 Mt). However, Europe has the highest per capita e-waste generation rate at 16.2 kg per capita, and Oceania rates second at 16.1 kg per capita, then North and South America at 13.3 kg per capita, and Asia and Africa with 5.6 and 2.5 kg per capita, respectively. The rationale behind increases in e-waste are significantly associated with higher disposable income, urbanization and industrialization, leading to growing consumption of Electrical and Electronic Equipment (EEE). Every year, EEE consumption increases by about 2.5 million Mt. 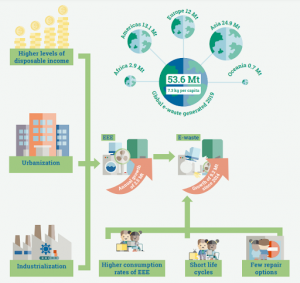 Additionally, nearly 17% of total produced e-waste in 2019 was documented as collection and recycling, with the remaining 82.6% of e-waste going to informal recycling and disposal. The concentration of recycling is also not evenly distributed around the globe. For instance, 42.5% of total e-waste is collected and recycled in Europe whereas this rate is much lower for Asia (11.7%), America and Oceania (9.4%) and lowest in Africa (0.9%). Many high-income countries have introduced e-waste management policies which are missing in most low-income nations. These informal activities involve the local industries creating employment opportunities for hundreds. However, in case of informal recycling, protective measures are scarcely taken to recover precious materials resulting in emissions of toxic pollutants and heavy metals in the surroundings. Human exposure to such annihilations can significantly damage human health, including adverse birth outcomes, DNA damage, cardiovascular and respiratory effects, cancer and so on. Most informal recycling takes place in Asia, Africa and Latin America. In the United States, most of the generated e-waste is dumped into landfills. The rest is exported to Asia and Latin America where e-waste is burnt or left at landfills, posing a high risk of contamination to the surrounding areas as leaching of lead and other substances pollutes  soil and groundwater reservoirs. Improper recycling, moreover, contributes to global warming incurred from the release of 98 Mt CO2 equivalents which was approximately 0.3% of the total global energy-related emissions in 2019.

Nonetheless, since 2014, countries from developed and developing worlds have come up with national e-waste policies to ensure proper management and handling of e-waste. As of 2019, about 71% of people within 78 countries are covered under these legislations, an increase from less than 45% in 2014. However, the implementation of e-waste policies are not yet up to the mark in some regions given the lack of investment and political motivation. 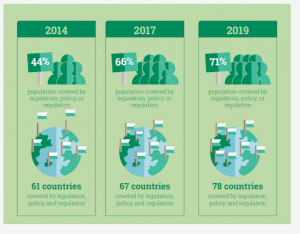 With the progression of modern science and technology, the demand for EEE products are at peak. But the improper management of waste after the end-of-life of these products have a long and lasting impact on both human lives and the environment. The 3R’s (Reduce, Reuse and Recycle) technique is not yet proven to be effective as informal recycling results in the exposure of hazardous materials. It is high time the world came up with a safer, more sustainable solution to handle this hazardous waste while protecting human health and environment.