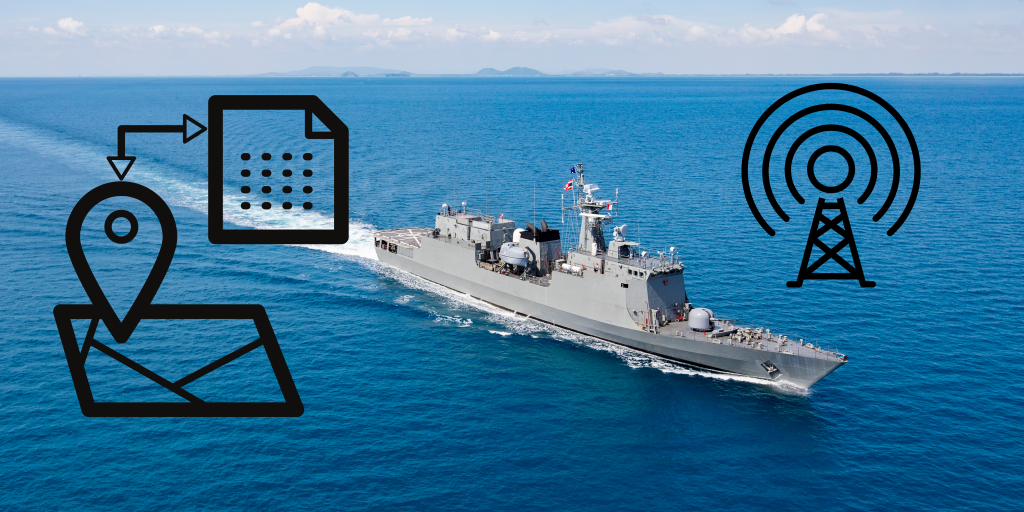 On September 17th, 2020, the HMS Queen Elizabeth, the largest ship in the U.K’s Royal Navy, sailed towards the Irish Sea. An entourage of her smaller ships followed. However, satellite imagery of the region at the same time showed nothing but open ocean. No 283-meter-long fleet flagship was detected, nor were any of the smaller ships, and news outlets reported them docked at various ports.

This odd occurrence is part of what is being called phantom warships. The HMS Queen Elizabeth is part of an unsettling trend of warships having their positions and/or voyages faked using their automatic identification system (AIS). AIS is a wireless radio technology that uses GPS data to broadcast the ship’s identity, position, course, and speed to prevent crashes at sea and maintain safe waterways. International law requires all ships to have AIS transponders installed with an exception to smaller commercial ships and military vessels.

Conservation technology nonprofits SkyTruth and Global Fishing Watch collected and analyzed location data and found over 100 warships from at least 16 countries, including the U.S., produced fake locations in just the last year. Only a few of the faked warship tracks had previously been reported, including two NATO warships whose locations were faked off the coast of a Russian-controlled naval base in the Black Sea. Their real ships were spotted 180 miles away.

Bjorn Bergman, a data analyst for SkyTruth and Global Fishing Watch, has been looking into fake AIS tracks to expose illegal fishing. He noted, “At SkyTruth, we’re particularly concerned where fake data is impacting fishing. But we want to understand generally how the data is being falsified and what we can do to detect and correct it.”

Bergman identified nearly 100  sets of AIS data tracks that had been fabricated. He noted his concern that the phantom ships were largely military vessels from European and NATO countries. Bergman uncovered Queen Elizabeth’s imaginary entourage in addition to finding reports that the AIS voyage for the U.S. guided-missile destroyer, USS Roosevelt, was faked as well. More recently, Bergman tracked a fake AIS track of the UK destroyer HMS Defender and the Dutch frigate HNLMS Evertsen, which were said to be in the Black Sea steaming towards the Russian naval base near occupied Crimea.

Why would warship tracks be faked? It is suspected that a ship’s location is faked to make it appear as though the ship is intruding in disputed waters to intimidate without the risk of an actual attack. Allegedly, two days after the HMS Defender AIS reported it was near the Crimean coast, Russian forces fired warning shots in the direction of the assumed location of the destroyer.

Phantom ships with faked AIS tracks are still “sailing” the world’s waterways today. Faking AIS tracks and signals does not cause any known operational harm to ships. The maneuver is intended to provoke, however fake data does pose potential threats to general maritime safety as ships depend on navigation systems. Bergman is optimistic that this is a “solvable problem,” while others seem less hopeful. Nonetheless, fake warship location data continues to pose ethical problems surrounding safety, illegal marine activities, and ethical uses of location data.