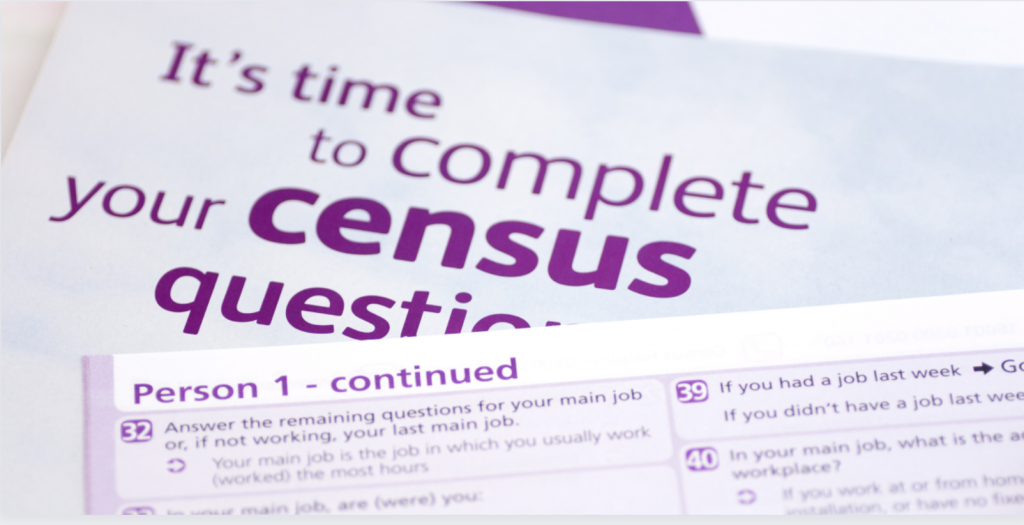 Every ten years, the United States performs its census count. Enshrined in the Constitution under Article One, Section Two, the U.S. Census is performed to get an accurate count of the country for legislative representation. In essence, the Census divides up 435 House of Representative seats to each state in the union based on population, but leaves the decision of how to divide seats within states up to the state itself. 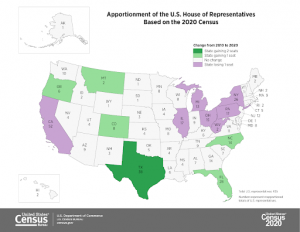 Following the 2020 U.S. Census, 13 states had made changes to their congressional representation, including California losing a seat in the U.S. House for the first time in its history. This reapportionment began a long cycle of redistricting as states realigned their House seats to the changing demographics within their borders. According to the National Conference of State Legislatures, there are many traditional principles to redistricting that have been adopted by the states:

Despite such principles, there are many moments where they collide, most notably when states seek to preserve communities of interest. Although the initial phase of drawing lines and boundaries following the 2020 Census has all but concluded, multiple states’ redistricting proposals remain in courts due to litigation and charges of gerrymandering. Gerrymandering is the process in which parties in control of the redistricting process manipulate the boundaries of the districts so they favor their party. U.S. courts hear charges of both racial and partisan gerrymandering, although in practice, it is much harder for litigation to prove partisan gerrymandering. Racial gerrymandering on the other hand has many legal pathways for litigation, although most cases are brought citing the Voting Rights Act of 1965 (VRA), which argues that if a state has a large minority population, federal law states that majority-minority districts should be created in order to prevent the dilution of minorities’ voting strength. These minority-majority districts are one of the main sources of strife within redistricting law, as they often bring the traditional principles of redistricting into conflict with one another. A notable example is present in Texas’ Rio Grande Valley. 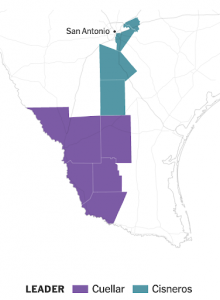 There has been a long history of two separate communities of interest in conflict with one another in Texas’ 28th Congressional District. Due to the VRA, Texas is required by law to provide numerous districts allowing Hispanic Texans to elect a representative of their choice. This law means that much of the districts along Texas’ southern border snake across Hispanic communities to create such majority-minority districts. However, in district TX-28, this often means anchoring the district across two very disparate hispanic communities—Laredo and San Antonio. The evidence of this can be seen in the district’s recent primary elections, which provided insights on the distinct political differences between more conservative leaning Hispanics in the counties surrounding Laredo, and a different set of political interests in the counties closer to San Antonio. In terms of giving communities of interest power to elect a representative of their choice, this district leaves more to be desired, according to the courts, this district is kept to maintain a majority-Hispanic district.

When tasked with two principles in conflict with one another, many states opt to preserve the majority-minority districts required to them through the VRA, knowing that any choice otherwise pends lawsuits towards their district plans. However, as state demographics change, states are tasked with the possibility of necessitating even more VRA districts, as evident by the recent turning down of Louisiana’s redistricting plans by a federal judge, on charges that it needed to include two Black-majority districts, not just one.

In 2018, election analysis website ‘FiveThirtyEight’ released its Atlas of Redistricting, showing how districts might look if redrawn under different guidelines, from strict compactness, to supporting competitive elections. Although some of the maps are outdated due to the recent 2020 Census, the online tool provides an important visual representation of how redistricting forms our House of Representatives.

Another tool, ‘Dave’s Redistricting App,’ allows users to create their own maps of congressional districts along with state legislative districts. Numerous states during their redistricting process allow residents to submit their own proposals for drawing districts, and this tool provides residents with the ability to realize such proposals. Hispanic advocacy groups in Colorado were able to present proposals to Colorado’s redistricting commission, urging them to create a Hispanic-opportunity district. According to the Colorado newspaper Gazette, their advocacy was taken as far up as the Colorado’s Supreme Court. Ultimately, the seat Colorado gained from the 2020 Census reapportionment went towards creating a district north of Denver with Hispanic voters in mind as a community of interest.

The ethics of redistricting are complex as it puts numerous principles at odds with one another. Despite such conflicts, the overarching aim is to design maps that place communities of interest in a position to advocate for themselves. This process can grow more transparent with more equitable outcomes if more states opt for independent commissions and accept proposals for review from their residents.